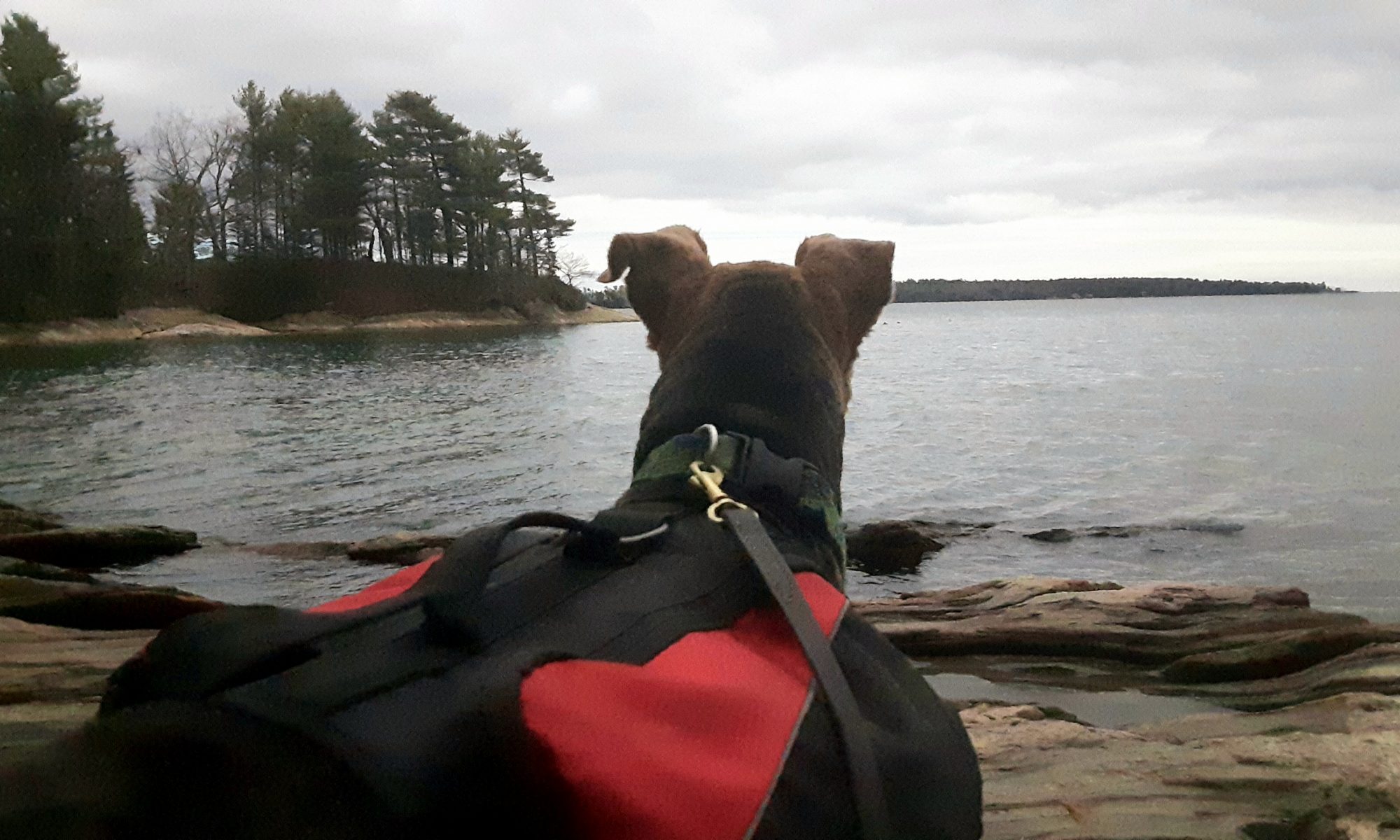 Cricket and I went to the coast for a mini vacation this week. I was careful to pick weekdays, not the weekend, when there would be less traffic. I picked Freeport because of Wolfe’s Neck State Park, which is open year-around and allows dogs.

My family and I went to Wolfe’s Neck last year and I fell in love with the place. Given the pandemic and everything going on, I was looking forward to some time away in an outdoor setting.

Walking trails lead throughout the parking with a variety of terrain and lengths of trails. One of the trails is wheelchair accessible, which I love. It follows along a ridge to the overlook where you can watch the ospreys nesting on the island.

Our first day there I intended to buy a season pass to get into all the Maine State Parks. The website said I could buy one online and have it mailed to ne, which obviously wouldn’t work out since I was already a hundred miles away from my mailbox. Or I could buy one at the park.

I decided to get one at the park. We arrived and I found a park ranger emptying the self-service payment container. As it turns out, while the park is open year round, it’s self service for part of the year.

I had pretty good timing, however. The ranger was there when we got there. He was very helpful and went off to get me a season pass from the office since the park station wasn’t open and didn’t have any passes. We waited in the parking lot for him and he brought a whole bunch of goodies along with the pass, including a Maine State Park Passport and Geocache record. I’d never really heard of geocaching so the passport was a good excuse to get into it.

It was a rainy sort of day but we went for a long walk on the trails. I made the mistake of letting Cricket take the lead and she went off at a jog for two miles. She wore me out!

We didn’t see too many people all three days we were there. The first day, we met a family with small children. Cricket wanted to keep them and they wanted to say hello. Their grownup was very sweet and told them to wave hello to the dog.

A couple hours south they’re well into spring. Things are green and soft and warm, and it makes me happy.

I accidentally scared the living daylights out of two of my brothers so I had to buy chocolate to make amends. That called for a visit to Wilbur’s of Maine to get homemade chocolates for the boys and a few for me.

I didn’t pack any kind of art supplies and realized it was a terrible idea, so I hopped over to Island Treasure Toys and got watercolor paints and paper. Honestly it’s the first time I’ve had real watercolor paper, and it is AWESOME. The rest of the shop was a lot of fun to explore and I will probably have to do some birthday shopping there for my nephew.

My mum and I found Two Brothers Books in Freeport and have been checking them out regularly on our Portland trips over the last couple years. We usually find something good hidden away in the shelves, and I just had to stop in and take a peek while I was in the area.

It was a great trip. We had lots of time to relax and rest, and we got to explore and check out different places and reconnect with favorite places.