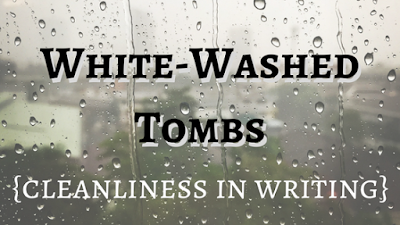 I have people who tell me I shouldn’t have any swearing in my books.
Well…

*whispers* I don’t always agree with that.

I’ll be honest, I’m pretty nervous to share this post with people. I hear it so often from so many different places:

And the ever baffling ultimatum:

I’m never exactly sure what they mean by “clean” because life isn’t clean. I understand about keeping things appropriate for the age level and not being slimy and trashy even when you’re writing to young adults and adults. But some of these restrictions don’t make sense to me because it’s stuff I run into in the outside world, about once a week. Thank God for messy books like Katherine Paterson and The Bible, that helped prepare me for meeting messy human beings. (And helped me figure out myself, messy human being exhibit A.)

If you’re sitting saying that the Bible isn’t a messy book, I don’t know what parts you’ve been reading, because it sure isn’t pretty.
In Matthew when Jesus is chewing out the Pharisees? (Matthew Chapter 23, go look it up.)
He calls them “white washed tombs” and “brood of vipers”. Now look in the Old Testament at what the cleanliness laws are and consider what those terms actually mean to the elite of the Jewish people. If you actually think about it, he’s cussing them out pretty bad. We just don’t realize that because those words don’t really mean anything to us today. We don’t understand the severity of those terms.

The argument people throw at me most often is “Do it all for the glory of God.” You know, this section of 1st Corinthians 10:

“I have the right to do anything,” you say—but not everything is beneficial. “I have the right to do anything”—but not everything is constructive. No one should seek their own good, but the good of others.Eat anything sold in the meat market without raising questions of conscience, for, “The earth is the Lord’s, and everything in it.”
If an unbeliever invites you to a meal and you want to go, eat whatever is put before you without raising questions of conscience. But if someone says to you, “This has been offered in sacrifice,” then do not eat it, both for the sake of the one who told you and for the sake of conscience. I am referring to the other person’s conscience, not yours. For why is my freedom being judged by another’s conscience? If I take part in the meal with thankfulness, why am I denounced because of something I thank God for?So whether you eat or drink or whatever you do, do it all for the glory of God. Do not cause anyone to stumble, whether Jews, Greeks or the church of God—even as I try to please everyone in every way. For I am not seeking my own good but the good of many, so that they may be saved.

Okay, that’s great! Thanks. Throw a Bible verse at the issue, because that always fixes it.

I write stories. I don’t write for a Christian audience, and I have never claimed to. I don’t write for a secular audience. I write for readers. I write because I believe these are stories that need to be told. Occasionally I write because God says “oh ho ho, my dear, you’re not getting out of it that easily” and leaves Howler notes in my dreams until I get my rear end in my desk chair and write. (I wish I was kidding.)

My stories are populated with people. Some of them have had really horrible things happen to them, and that shapes their character, and sometimes who they are when we meet them at the beginning of the book isn’t pleasant.

I cannot demand they are squeaky church-approved clean.

I can’t! There it is. I cannot demand that the characters in my story be different than they are.

If I demand that my teenage character Theo {The Importance of Blood} doesn’t swear in the first half of his story, I miss out on the way we learn he’s healing. He’s angry, he’s scared, he’s hurting. He acts out and yells, cusses, breaks dishes, throws things, and generally makes a mess of everything.

But then he starts to feel safe.

He starts to feel loved.

He starts to feel wanted.

That is shown in the way his behavior changes. In the way his character develops. He starts actively trying to work on his anger issues. He stops cussing. He stops breaking dishes. And he learns to apologize when he hurts someone. And by the end of the book we’ve found he’s a sensitive kid who had to grow up too fast, who grew a thick skin to keep himself safe. He’s trying so hard to be better than who he was, because he doesn’t like who he was. 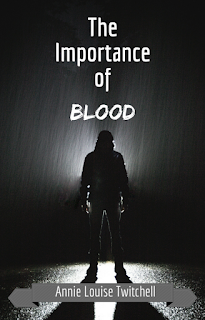 I don’t throw swear words around carelessly because that eliminates the purpose of having them in there. The reason to have them in my story is to communicate that something is wrong. Someone is hurting, something bad is happening, THERE IS A PROBLEM HERE. One well placed swear word can be exactly what is needed. I work hard to make sure it’s in the right place. Sometimes I can replace it with ‘Theo swore’ but sometimes that’s a cheap cheat and it shows.
And no, I’m not trying to tell people to put swearing in their books. If it doesn’t have a place, don’t put it in. It’s as simple as that. I’m not writing this to tell other people what to do; I’m writing this to explain why I do things the way I do.

{One of the things I love about blogging is that it’s an interactive medium of sharing my thoughts. One of my new followers sent me a lovely email in response to this post, and hearing her point of view allowed me to find the piece I knew I was missing somewhere, and wrap this up so I’m happier with it. And if any of this is confusing, I’m sorry. My head doesn’t always arrange itself in such a way that it can make sense.}

What is the intent? I try really hard to make sure the bad stuff I show in my writing is met and matched by hope and light. There is truth in the bad things. But there is also truth in the good. My intent is not to shock people with foul language. My intent is to use that as a tool to further, deepen, and strengthen the story I’m telling. My goal is that the words I lay before people have been considered, weighed, measured, and found to be needed in their place. I don’t throw these things around casually, my dears. But I know from personal experience that the right book at the right time, dealing with hard things and showing things that aren’t pretty… that can make all the difference in the world.

Some of the time I read Christian fiction and it leaves me feeling sick to my stomach. It’s so sappy and melodramatic and overly moralistic and oh-so-clean. It completely abolishes the fact that we live in a world where bad stuff happens every day. And then I read books like The Fault in Our Stars, which has some language and some sexual content, and it’s a breath of fresh air because these, these are kids like the ones I knew at high school. These are people I know. I’m not saying that it’s okay or that I agree with everything that is said and done; I’m saying that it’s real.

The best is when I find books that give me that “I know this character, they’re a person like I could meet on the street” that are written from a point of view that shares the good and the hope as well as the bad and the hurt. Stories that are written to strengthen, challenge, and reassure those who read it. They don’t shy away from the messy parts, but use them as necessary, as a tool to tell the story.

One of my romance stories doesn’t have any language, any sexual content beyond the couple kissing when they get engaged. It doesn’t need it. It would be horribly inappropriate to include it, not to mention disrespectful to the characters, the story, myself, and my readers. I have a lot of stories like that, actually. But that doesn’t mean the other stories aren’t there too, and it doesn’t mean they don’t need to be written. How can we ever hope to reach the hurting if we act like they don’t exist?

See, life is messy. And I write about that. But life is also really cool, and sometimes we meet other humans and we just *click* and that’s it, we’re family now. And life has rainstorms and thunder and apple blossoms and waterfalls and autumn leaves and holding hands while you walk to the post office. And life has snow storms and crocuses and sunlight pushing through a cloudy day. And life has mud puddles and blood and death and dark, dark earth that sticks to your shoes because it’s so moist and rich. It’s a huge, tangled up, complicated mess of so many things, and I don’t know how to pick and choose which things I talk about.

So yes, sometimes my stories are messy.