Jump: The Things I Remind Myself is here! Order your copy on Amazon, in paperback or Kindle format (or both!) 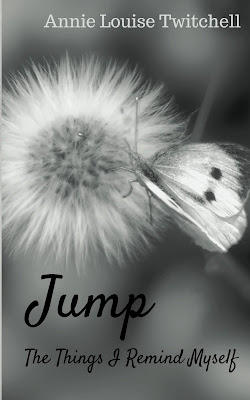 Here’s some of my posts from the Facebook launch party:

So the title of the book is Jump: The Things I Remind Myself
I picked this title because of one of the poems in the book, the only one of my own that I have actually memorized. It’s called Jump:
All she wanted

As some of you may know, I have anxiety, and I go between being super excited about all this adult stuff and doing my writing and presenting it to the world, and completely losing my mind in endless worries and meltdowns over it. I wrote the poem Jump almost a year ago. Actually, it sort of wrote itself. I looked down at my paper and there it was. I have always remembered it since then, without really sitting down to memorize it.
As some of my brothers can tell you, we used to go jumping off this little cliff at my aunt’s house when we were little. (That was one of the things my dad wished I hadn’t told him, about twelve years after the fact.) It wasn’t a cliff, exactly, it was this steep bank in a gravel pit. We would jump out, and about three feet down we’d hit the bank and slide down the rest of the way. Those few seconds in midair were heaven. I felt like a butterfly, like I could just drift off on a passing breeze.
At some point I got scared of jumping. I got scared of testing things. I got scared of trying out new things and exploring and poking at things with a stick (or my bare hands) and just generally being curious. And while I’m working over that, and I’ll tell you about the adventure I had yesterday when I temporarily misplaced myself, I’m still can be nervous about people. I’m not nearly as bad as I was about Spinner of Secrets, but it is still a process.
This book has been a stretch. It’s been pushing myself. To do Spinner of Secrets, I had to learn to let other people help me. To do Jump, I had to do it myself. I had to just sit down and do it. It was hard. It’s been so incredibly worth it, and this is the first day the book is public.
Anyway. Here’s a pair of butterflies. (I did take this one myself.) 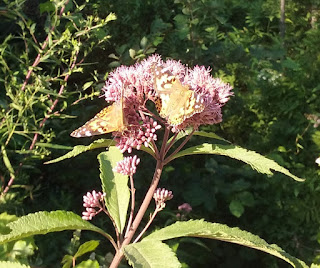 What’s up next?
The Ocean And I is a short scrapbook type collection of poetry, prose, and photos. Not 100% sure when that will be coming out, but it should be in the next few weeks.
No Dragons, Please! is a children’s short story I wrote for my youngest brother a couple years ago, that I’m revising for publication in November. Here’s my absolute favorite line from that one:

“I told you, I don’t know how to fight a dragon! The last thing I want to do is get killed!”

“If you’re avoiding death, maybe you should have considered an occupation other than a knight,” Ninnia muttered.

Amazon – Jump: The Things I Remind Myself