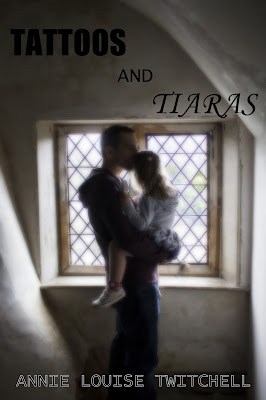 I’ve been picking away at this since November, off and on, making little edits here and there. But since I’ve finished writing the first two Importance Books, The Importance of Blood and The Importance of Stars, I’m taking a break on that series for a while and decided to work on Tattoos and Tiaras while I wait for Mom to finish editing Spinner of Secrets.

“James? James, I’m home.” Helen called, stepping into the New York City apartment.
“Hey, babe!” A voice called, and a slight smile played on Helen’s face as she closed the door and wandered into the kitchen.
James was setting the table for two, a pair of red taper candles burning already. They gave of a cinnamon scent that blending curiously with the baked honey and curry chicken he had made.
Rather than sit down, Helen leaned against the counter. “How was your week, James?” She asked, running her fingers down his tattooed arm. He smiled, catching her hand and lifting it to his lips to press a soft kiss against her knuckles before moving towards the stove.
“It was fine. How was yours?”
“Long.” She let out a sigh, watching him take the pan of chicken out of the oven. “I went to the doctor’s in LA.”
He set the pan on the table, forehead wrinkling with concern. “The doctor’s? Are you okay?”
“I’m pregnant.”
If he hadn’t just set the pan down, it would have crashed onto the floor. His mouth fell open and his eyes widened, staring at her until she gave a small laugh and crossed to him, closing his mouth. “You’re sweet.”
“I’m going to be dad!” He yelled, throwing the hot mitts up in the air. Then he caught her around the waist and kissed her firmly.
She submitted to that for a few seconds before pulling away. “Sit down.”
“Sit? No, I want to go climb the Empire State Building and let the whole bloody city know!”
“James, sit down.” The odd note in her voice made him pause, and he followed her example, sinking into a chair across from her.
“I’m pregnant, I’m filing for divorce, and I’m giving full and sole rights of the child to you.”
James just stared at her. “Wait, what?” Helen tapped her perfectly manicured fingertips against the table, tap-tap-tap-tap, and James stifled the urge to hold her hand to stop the noise. “Wait… Helen, I want kids… but I don’t want us to end because of it. I don’t need kids, I need you. We can put the kid up for adoption or… or something. I want kids, but I need you.”
She shook her head. “I’m sorry. It’s not the kid’s fault. And it’s not your fault. It’s just that I can’t do this anymore.”
He frowned, a sinking feeling in the pit of his stomach. “Is there someone else?”
She snorted. “No. That’s the whole point. You’ve been an amazing husband, James, and I know you’ll be a perfect father. But I can’t do this anymore. I can’t come home one more day to see your face, all lit up with a damn Christmas tree to see me. You have such a big heart, James, and so much love to give. It’s one of the things that I fell in love with when we were kids. But we’re not kids anymore and I can’t love. Loving costs too much. I can’t do it and I need to not. It’s killing me, the strain of being married to you. You deserve something better and I can’t give it and I’m leaving.” She stood up, and James could see the small swell of her stomach where their child lived – his child, since she was abandoning them. “I’ll be back in New York to give birth, then you won’t see me again. Goodbye, James. I’m sorry.”
“Helen,” he pleaded, but she was gone. He stared at the apartment door for an incredibly long time, until the taper candles had burned low. She didn’t come back. He dropped his head to the table and wept, hearing his heart breaking and burst into a thousand pieces on the table amid the untouched supper.
He ran.
Obsessively. Feet pounding on the sidewalks of New York City, running miles at a time and then dropping onto the couch of his apartment and staring at the TV until he fell asleep, only to be haunted by dreams of Helen.
“Goodbye, James. I’m sorry.”
Sorry?
How could she say that? How could she ruin him and then say sorry as if she’d just bumped into him at the grocery store and made him spill a can of peaches out of his shopping basket?
He worked out at all hours of the night, using the gym on the ground floor of the apartment building. Weight lifting. Running. Cardio.
Anything to make him so tired that his sleep was dead heavy and he didn’t have to hear Helen’s voice in his head. Didn’t have to feel a phantom touch on his shoulder. Didn’t have to keep catching her out of the corner of his eye.
Anything to make the memories go away and shut up so he didn’t have to keep remembering that he had been abandoned because he loved her too much.
He promised himself that he wouldn’t fall in love again. Not that way. He could love the baby, of course, and he would. And he’d have friends, someday. But he promised himself that he wouldn’t live a romance again. Helen was the strongest woman he knew but he was too much for her. He wouldn’t make that mistake again.
Once he’d decided that, it was easier to just banish all thoughts of romance and Helen entirely. He was James, single father, book reviewer, blogger. And that was that.
Copyright 2017 by Annie Louise Twitchell