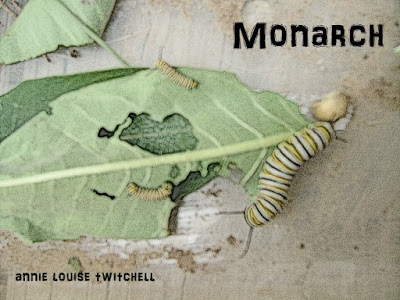 And lots of other things, like arachnids and snakes and frogs and turtles and mice and voles and moles and birds and squirrels. (Shrews are horrible, mean little things, and chipmunks have fallen somewhat out of favor after I was removing one from the house and it sank its teeth into my thumb and wouldn’t let go.)

In a family of five boys and me, I was the one with the most interest in creepy crawlies. I threatened my oldest brother on more than one occasion, that I’d put a snake in his bed. I never did because I didn’t want the poor snake to get hurt.

It was a clear plastic box about ten inches long and eight inches wide and eight inches tall, with a brown plastic lid that looked like a colander, with a little door in it for putting food and things through.

One summer I used it for snakes. Due to my brothers snake phobias, I had to keep it in the back corner of the yard, behind the biggest birch tree. That year, I was apparently attracting snakes, because every few days to couple weeks I’d have a new one to put in my box and let the old one go. I gave them leaves and bugs (grasshoppers mostly – I refused to feed crickets to anything because I liked their singing), and water in a milk jug lid. I had names for each of them – the pair I had for the longest was named Jack and Jill, because I found them at the bottom of our hill. One of them even shed its skin. I went out one morning intending to release it, and it was all white and not moving. I’d never had any of them die on me so I was a little freaked out, but I went inside and got Mom, and she came out and looked at it, and then it started wiggling and split its skin and slithered out. I have the skin in my nature collection up in the attic still.

I used my bug box for raising Monarch butterflies two years in a row. I’d go out and check the milkweed in the scrub at the back of the yard, and if I found a caterpillar, I would ‘vewy vewy cawefully’ pick the leave it was on, and take it to my bug box. I’d feed them milkweed leaves, and I’d clean out the box every couple of days and restock it with fresh milkweed leaves and flowers, and I’d watch them get bigger and bigger and bigger until one morning they’d be up on the underside of the lid, hanging upside and spinning themselves into a chrysalis. (I was very proud of myself for learning that word.)

And then they’d just sit there for a few days. That was okay, though, because I loved the colors of the chrysalis. Sort of a minty blue green, with lots of little gold dots. It was so cool that there was gold dots on something that was so temporary like that.

And then the chrysalis would start to get clear, and you could see a lot of black and orange, and then it would open and a very wet, miserable looking, bedraggled little butterfly would come out, its body all out of proportion and weird looking.

On of them, I actually got to watch hatch out and open up. I went out to check on it and it was just opening the chrysalis, so I went running inside and got Mom to come watch. I think we skipped lunch that day – told the boys to make it themselves or have peanut butter and jelly. We watched it for hours as its wings dried out, and it began moving around a bit. We put some flowers in the bug box and it liked those a lot. Butterflies have such weird tongues! We were very careful not to touch the butterflies – their wings are covered in very tiny scales and if you touch them, the scales come off, and that’s not good. It’s hard for them to fly. 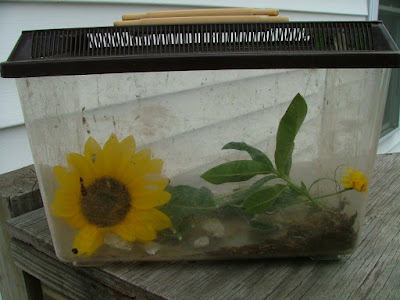 If you look closely, you can see three chrysalises in the top right hand corner of the bug box. 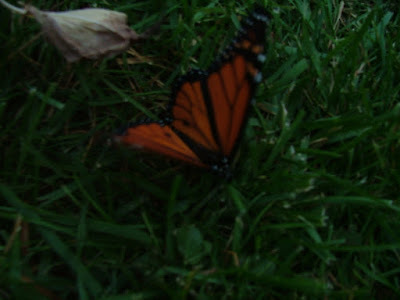 Do you have any idea how hard it can be to capture a butterfly on camera? Especially when you’re nine and can’t hold still from excitement? 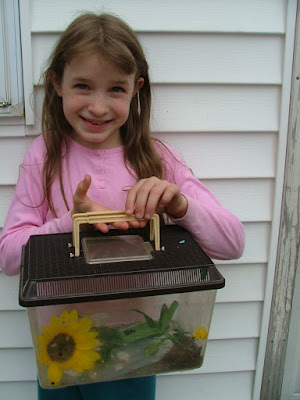