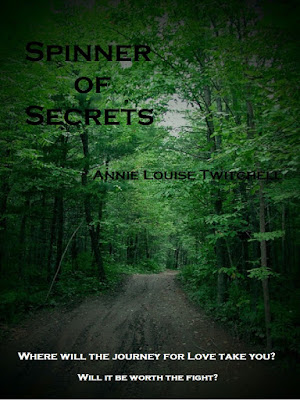 Okay, so I really love back to school sales. Know why?
*reduced prices*
On stuff like, my favorite pens (very colorful, I love colorful) and notebooks and paper and portfolio folders and erasers and colored pencils (okay so I mostly use those for drawing and not writing) and sparkly paper clips and…
Yeah. Anyway. 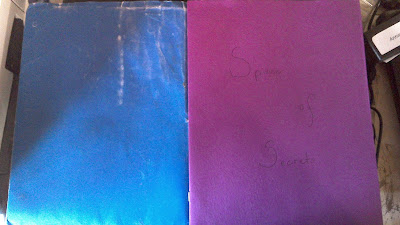 On your left.
So on the left is the portfolio folder I have been lugging SoS around in for the past nine months. It had seen about four different drafts. It also housed paper for making origami butterflies because my fingers get fidgety sometimes and I need something to do so I make butterflies or doodle or something like that. It’s been drowned, lost, carted all over the state of Maine in a faded blue and white tote bag along with pens, pencils, a pocket knife (thank you, Tom Sawyer), and the occasional rock collecting finds.
It was getting kind of old. So today I transferred everything over to a lovely new one. It’s purple! (On the right, which by process of elimination should be fairly obvious.) 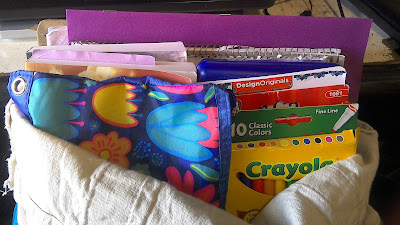 So in my writing bag, I have the following:
I took it to the beach last week and my mom’s friend made the observation that it was as heavy as hers, which was twice as big – mine is full of books. Hers was not. Books make things heavier.
Also, I have a new filing cabinet! So now I can actually file things neatly and properly and be able to get at them when I need them and not have to worry about my cat sleeping on them and leaving cat hair all over them (she’s shedding) or my rabbit eating them.

At a family event last week my uncle asked how the book was doing, and the universe and my brain were aligned properly so that I was able to glance in the faded blue and white tote bag slung over my shoulder, look at him, grin, and announce that it was behaving itself.

This was quite a masterpiece because although I can be very entertaining, it works best in the written word instead of spoken, because I entertain myself so much that I can almost never deliver it properly. I start laughing in the middle and sometimes I can’t even finish saying it. So I was really pleased with myself for being able to deliver that line without busting up laughing and ruining it.


Oh yeah, and on Thursday (while I had a head cold, no less) I figured out how to set it up so you can subscribe by email and some other formatting stuff. I have been trying got figure that out off and on for the past six months. Obviously I need to do technical work, when I’m sick.