This short story I wrote when I was twelve. I submitted it in a Christmas Short Story contest and I won first place, which I was some excited about. The funny thing is, I wrote it before my family got sheep, and then I was reading it over after we’d had the sheep for a year or so – gosh, I’m good. In the story, Alexandria behaves just about like my Peanut Butter, who is staring out of the photograph below. (She wanted to know if I was going to put away my camera and give her some sweet feed.) 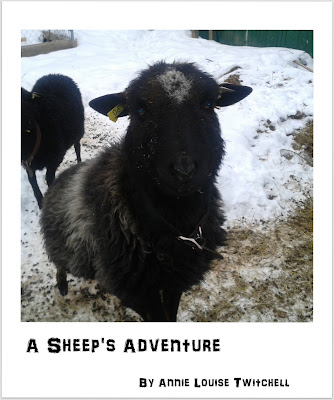 The adventures of Alexandra,As told to Bartholomew the owl.Hello. My name is Alexandra. My shepherd boy calls me Woolly. Can you imagine? I mean, there are at least six other sheep in the flock that are named Woolly! But anyway, where was I? Ah, yes! I was going to tell you about my adventure. My adventure, you say. What, didn’t you know that sheep can have adventures too? That is what I am going to tell you about.Well, it was night and my shepherd and his boy were lying on their backs, watching a huge star. They were suddenly, well, I am not sure how to describe it. One moment all was peace and calm and quiet, then the sky exploded with light! There was this huge man with wings that were white like a dove’s, but bigger than an eagle’s. And the man said, “Fear not, for I bring you tidings of great joy, which shall be unto all people. For unto you is born this day, in the city of David, a Savior named Christ the Lord. And this shall be a sign unto you, you will find the babe wrapped in swaddling clothes and lying in a manger.” Then there was a lot more of these huge people, men and women, all with wings. They were singing “Glory to God in the highest; and on earth peace good will toward men.”
Then they, well, disappeared. One moment they were there singing and then they were gone. Just gone! Then all the shepherds from the whole field came up and said, “Did you see that?” “WHAT were they?”“Well, do we go to Bethlehem?” This last question came from my shepherd.“I think we should, if this is the Savior we have waited for so long , as I think likely, seeing that angels of God Most High heralded his birth.” This was an old woman, whom everyone called Grandmother. (She was only my shepherd’s grandmother, but acted as everyone’s).

“But I think that it is strange that he did not come as a warrior.” This was Matthew, the oldest man present. “Ah, but do you not know what Isaiah said over 6 hundred years ago, ‘A virgin shall conceive and bear a son, and will call his name Immanuel’? ”.“Yes, Grandmother, but how do we know?”“Well, I would think that when angels tell you, you might credit it. I will go to Bethlehem. Who will come with me?” “I will, Grandmother.” “And I!” The shepherds were all in agreement. All except Matthew, that is.“But what of your flocks? You cannot expect to take them, surely.” “Ah, why not? If Messiah is lying in a manger, you can’t expect him to mind a few sheep.” This was Grandmother. “A few! A few! Grandmother, do you realize that there are 3 flocks here?”“Yes Matthew, but I don’t think we should let this chance go by. I don’t think a manger is to be found but in a stable, and most stables will have a yard. We can put the sheep there. But we must hurry if we are going. Matthew, will you come?” “Yes, I guess.” “Good! No time to lose! We must go now.” It was not far to Bethlehem, and we made good time on the roads. When we got to Bethlehem, we quickly found the stable. It was not hard to find: a wide beam of light from the star fell across the roof. Inside was dark except for the light of a single candle and a soft glow from the back wall of the stable. A soft voice sang a lullaby, and we heard the gentle sounds of animals bedded down for the night. Grandmother knocked on the door. “ I am coming, just a moment.” A big man opened the door. “What? Who are you?” I took this opportunity to introduce myself. I pushed forward and rubbed my head against his knee. “Oh! You are shepherds! Come in, if you can, we are a little crowded,” he said, scratching behind my ears. “Are you Jews?” “Yes, I am Matthew, of Bethlehem.”“Joseph, of Nazareth, a carpenter. Whose sheep is this?”My shepherd come up, “She’s mine, I hope she has not been a bother.”“ No. What brings you here?”“We have seen angels, and they told us to go to Bethlehem, where we would find a babe, wrapped in swaddling clothes and lying in a manger”, said Grandmother.“Yes, that would be here. Come in!” said Joseph. We went in, and saw a baby lying in the manger. The voice we had heard was that of his mother, Mary, who stood and lifted him out of the manger. She said “This is Immanuel, God with us. When you leave, tell all you meet, ‘ I have seen the Messiah! He was indeed born of a virgin, as God through Isaiah said.’ ” “We will, you may be sure of that!” said Grandmother “But you will want rest, and our sheep want tending. We will bid you farewell now!” “Goodbye!” said Mary and Joseph. “God be with you!”