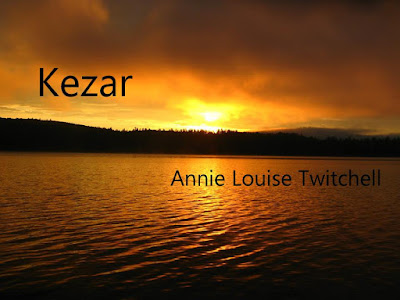 Kezar
Annie Louise Twitchell
The early morning mist rises
from the surface of the lake.
The dawn light is reflected
on the smooth, glassy waters.
The mountains across the lake
seem to be blazing with fire
as the rays of new sunlight
fall across the high peaks.
A loon calls; another answers.
A light breeze picks up,
the treetops begin rustling.
I push open the door,
go down onto the lawn.
The dew is thick and cold on
my bare feet. On the dock I sit,
my feet dangling in the water.
I hear a low rustle behind me.
Turning slowly around, I search
for the source of the sound.
There! A little chipmunk
is running through the grass,
his cheeks enormous with seeds.
He disappears under the porch.
In the tree above me a squirrel scolds.
A sunfish stops to nibble at my toes.
Squealing, I splash him away.
I go up from the water
along the road for a walk.
Under the whispering boughs of the
woodland trees I find something
precious, something I find each
morning but lose again during the day.
Here in the woods on the edge of water
I find peace, serenity, grace,
more than can ever be found
in places men have built,
but that can be so easily touched
in the cathedral of towering trees.
One feels small here, but it is good.
You do not need to be important,
you just need to be.

I spent a couple summers at New England Frontier Camp on Kezar Lake, which was one of National Geographic’s Top Ten Most Beautiful Lakes… in the world. It’s a boys’ camp and I broke all the rules for girls – I liked spiders and I was fascinated by snakes and frogs are neat and I was the person who removed wasps from the dining hall. Sorry, guys. I’m just kind of good at being different. I was my parents’ fourth child. I was a girl and I had hair. After three bald boys I was definitely different.

How you ever met a Northern Water Snake? I found one, sunning herself on a rock. I stopped reading and watched her instead, so intently that one of the staff members had to come ask what was going on. She got scared by the intrusion and slithered off the rock into the lake, and swam about ten yards to hide in some rocks,

I HAD NO IDEA THAT MAINE HAS SNAKES THAT CAN SWIM.

I really do like snakes, so that was super cool. At another point, the same snake was on the boat ramp and they needed her moved. I offered, if they got me leather gloves, but no one believed me. They figured it out themselves.

Anyway, I wrote the above poem last March for the Rockland Public Library Poetry Contest 2015. I won second place for the teen category. It was one of my first dozen poems, and I wrote it just a few weeks after finishing my poetry class. I was flabbergasted to get the email that said ‘Oh hey, just so you know, you won second prize, wanna come to Rockland and read your poem to us?’

So it was worded more formally than that, but whatever. I went to Rockland with most of my family. I read my poem (while a Monarch swarm of butterflies invaded my stomach) to a fairly large audience. I was told by one of the older poets that she liked my reading best. 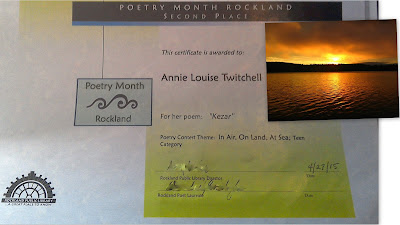 Also I got a pretty piece of paper. And about $100 worth of poetry books.