Skip to content
I wrote this for the Homeshcoolers of Maine Short Story Contest 2015. It was part of my senior year writing project. I won first place for my age range (14-17) and had it published in the e-magazine in October. HOME Digest Fall 2015
It was a bit of a challenge, actually, because the word limit I was working with was 1,500 max. At the time I was not used to writing small pieces and it was an interesting stretch of my writing skills. A review reader told me that she was having a hard time placing the time period – the story was modern but the words I was using to describe it were 19th century. I was reading Jane Austen and other similar authors at the time, but I also use those words in my conversation. It was helpful feedback to add to my files, so now I triple-check my dialogue because some characters just don’t talk in that manner even if I do. 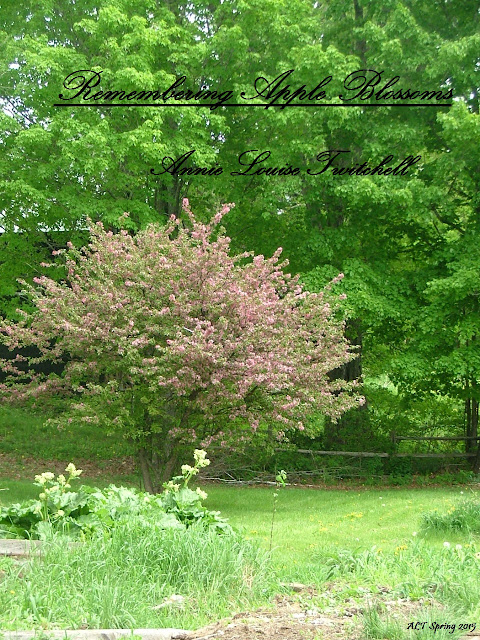 “What picture?”
“The night she died I went out to the garden. I stood in the garden and I could see a huge, ancient apple tree, away up on a hill, covered in blossoms, all alone in the twilight. Somehow that made me think of Abigail.”
Nathan nodded. “Sometimes you wish that you knew how something was going to work out, how the pieces would fall into place, but I wonder if it would hurt more if we did know.”
~~The End~~
Copyright 2015 by Annie Louise Twitchell
Revised 2016 by Annie Louise Twitchell
First Published by HOME