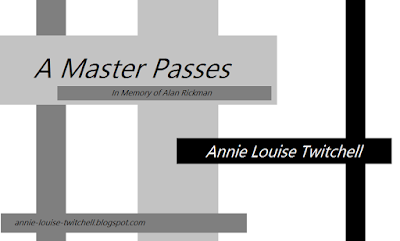 One winter, two or three years ago, I came down with a cold. It wasn’t a bad cold, you know, just the kind that makes you want to lie in bed all day and not move. So that’s what I did. And while I was doing that, I read. And that, my dears, is how I read all eight Harry Potter books by the fabulous J.K. Rowling in two weeks.

I really, really loved Professor Snape in the Harry Potter movies. The mental image I had constructed in the first few books didn’t work by the time I reached the end of the series (somewhere around day 9 3/4), and when I watched the movies several months later, something clicked. Oh, of course that’s Professor Snape. It all just made sense.

Then, this past summer when I was housesitting for friends, I watched Sense and Sensibility. I’d listened to the book off Librivox (which is incredible and if you haven’t heard of it, go check it out: librivox.org/) and I knew how the story went – but Alan Rickman’s potrayal of Colonel Brandon was breath-taking. There was so much heart in it, so much passion and feeling. It was hugely relieving to come to the end of the movie and feel so satisfied. He got rewarded for what he had laboured so hard for. It was… awe-inspiring.

I don’t feel like my poem has encompassed all that I wanted it to, but I haven’t been able to figure out how else to express what I’m trying to say. So here it is:

A Master Passes
Annie Louise Twitchell
A master of acting,
he stained my mind
with vivid pictures that
are hard to brush away.
He brought the words
to life like so many others
before, but he used his
own special way with them.
So much heart in his works,
and richness, depth.
I’ll not forget them soon.
He had a wide touch,
a deep influence.
He has left an expansive
sadness in his wake.
But his stories are there,
a breath away, to be touched
and remembered and felt
all over again.
Rest well, Mister Rickman.
Thank you for all the stories.
Copyright 2016 by Annie Louise Twitchell